UPDATE: EpiPen Crisis may have an answer...

Teva Pharmaceuticals USA, is offering an alternative to the Mylan epinephrine auto-injecto EpiPen. The FDA has approved, for market a direct generic competitor of the Epi-Pen device. There is a version for pediatric patients, a generic EpiPen Jr. In an emergency situation an auto-inject device is use to deliver a single dose of epinephrine, directly into the suffer's thigh. This attempt to stop the deadly allergic - anaphylactic shock - reaction, if vital to the suffer's survival. Without it they die.

Since 2014 the Lyme Disease Association has proclaimed MAY as Lyme Awareness Month.  In Canada March has been designated at Tick Awareness Month.  We now, with the number of tick species carrying life altering and now deadly tick-borne disease, have need to expand our efforts to educate and prepare people to avoid infections.

NOW… we need to focus, NOT on the Disease, but the CAUSE:  TICKS!


As we graduate and elevate our AWARENESS needs, we find the need for a new level in the battle with tick-borne illness. This requires a new approach.

Why the sudden call for a change in awareness direction?  Simple, we now have too many important infections -thus diseases- to consider to NOT focus on

The Powassan virus (POWV... but referred to as POW) first identified in 1958, was recognized  in the mid-1990s as being transmitted by the black-legged deer tick; the same vector for Lyme disease.  Now, the deer tick was a prime vector for not one, but two hideous tick-transmitted diseases. And the new one, the Powassan virus, was found to be worse than Lyme.

Over the past 10 years, the CDC has officially reported roughly 75 cases of Powassan virus. The hot-spots of Powassan virus, in the United States, are currently, the Great Lakes and Northeast regions.
Two things about the Powassan virus that cause its presence to worthy of sounding an alarm are :


LYME as a FATAL DISEASE

The CDC had to revise their earlier annual cases of Lyme - set at 30,000 - to a staggering 329,000 cases reported, as of 2015. And it's safe to say, this figure misses many that were not reported and continues to be serious problem, increasing each year.

Yet, as devastating as Lyme disease is, to those unfortunate enough to not have early antibiotic control eliminate the infection, Lyme itself is very rarely a direct, 'cause of death.

The vast majority of deaths, within the population of those suffering Lyme disease, are due to complications brought on by the prolonged system disintegration while suffering from Lyme disease.

More people die by suicide, after suffering prolonged depression and the deep levels of anxiety due to the experience of trying to live with Lyme disease and it's manifestations.

POW (Powassan disease) is getting attention because IT KILLS.  There is a 10% fatality rate. Death can happen quickly, in those who are infected with POW.

Lyme disease normally requires 24-hours for an infection to take place. With POW, infection takes place in as little as 15 minutes after attachment.

Population samples of deer-ticks have revealed POW virus present in from 1% to 7%. And the findings leave the scientists with no clear sign of how many POW infected ticks are likely to be in a population.

This information now segues into the next level of concern: POW is not just limited to 'deer-ticks'.  POW has been found present - not just as POWV, but as what researchers are calling Deer Tick Virus (DTV), a unique and more prevailent form of POW, as well as POWV (Powassan Virus).

[photos of these ticks]

Since 2014 the Lyme Disease Association has proclaimed MAY as 'Lyme Awareness Month'.  However, now we need to focus, NOT on the Disease, but the CAUSE:  TICKS!

So now we graduate and elevate our AWARENESS needs. It NOW becomes a need for: TASK - Tick Awareness Season Knowledge

A Review of Death Certificates Listing Lyme Disease as a Cause of Death in the United States - https://academic.oup.com/cid/article/52/3/364/307928

BAC and your health

An eye examination or the use of artificial tears should not end in a condition worse than before the supposed protective activity.  But many times this is just the case.  Eye drops - regardless of their chemical makeup - contain preservatives to keep them free of bacteria. These preservatives can and do cause many people a great deal of suffering.  The good news is, this suffering is avoidable.


If you are a sufferer of Chemical Sensitivity, then this post will be much more than simply, an article 'of interest' to you. The information here will spare you some serious suffering; some of it potentially life-threatening.


As I write this article, my right eye is puffy, red, irritated, itchy, watering and inflamed.  I had an eye exam 3 days ago, in which my regular ophthalmologist used an examination eye drop containing one of the most common preservatives used: BAC.

BAC is a widely used chemical preservative. BAC is used in a wide range of commonly used products, such as soaps, cosmetics, cleaning products, ophthalmic preparations, disinfectants, and spermicides. BAC inhibits bacterial and fungal growth. Thereby rendering the solutions, in which BAC is found, safe from bacteria-borne infections.  A very useful commodity for sure.

However, most such solutions (read: ALL!) come with a price. BAC is NOT an exception to this rule.
With BAC, that price is paid in your health.

BAC is one of four (4) acronyms used for Benzalkonium Chloride [1]. BAC is a highly hydrosoluble bipolar compound with surfactant properties; which means it acts like a detergent.  When BAC is in concentration between 0.004 and 0.02%, topical products (liquid products) do NOT allow bacterial cell walls or membrane to attach to any part of the products cellular structure. BAC's use is focused on stopping what is called, Gram-positive bacteria; those who are known to be serious causative agents of infection.

Simply put, BAC makes the liquid environment 'too slick' for bacteria to colonize. If bacteria cannot colonize, they die.  With no bacteria in the solution, then the solution drops to an industry standard level of 'unlikely infection potential'.  That is, for manufacturers and medical professionals, a sought-after acceptability.  Products then can be promoted, sold and used, on humans, for an often broad-spectrum of needs, by the millions of units.

Underneath all this euphemistic jargon, it simply means the product will become profitable. Those who make it can make money; usually a lot of money; from it.  Score. Point. Game.

For the most part, this kind of logic is also based upon a reasonably scientific rationalization. A product that 'stops or interrupts' infection is a good thing; especially in the medical professions.  So why would this not be a good thing?  Well, it is, in concept, for the most part.

For the most part.  That is until you look into what Benzalkonium Chloride does to the cells of the human body.  Then the value of its use comes into serious question.

Animal studies have shown that BAC has toxic effects, even in a single dose, at low concentrations, on the corneo conjunctival surface (cornea: clear covering over the iris; conjunctiva: the clear mucous covering of the eyeball).

It has been long known to ophthalmological professionals, that BAC, during prolonged usage in topical drugs, that damage will occur and the rise in allergic response is exhibited.

I address BAC (Benzalkonium Chloride) here because it is the most popular preservative used in topic pharmacology for the eyes.  But as this one study [2] clearly shows, ALL preservatives have either a toxic or allergic danger (or both) in their use; especially prolonged use. Or to quote them:

"...study confirms that most preservatives used in ophthalmic eye-drops may similarly induce strong histopathological and inflammatory changes in the ocular surface after short-term use."


Alright. I have addressed the problem.  I said there was a path to avoid this suffering. And so there is. 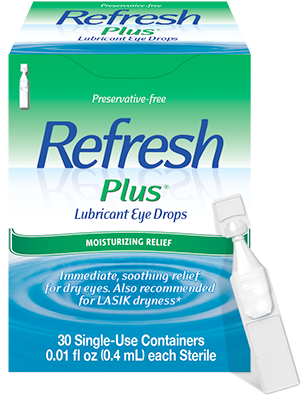 UPDATE:  My eye doctor suggested I use the Refresh PLUS artificial tear because it is 'preservative free'. And it may be - BUT - it is not free of chemicals harmful to hypersensitive people.

Thefore, I cannot recommend any OTC or prescription eye drops either. What my MCS facilitator told me today - when I went in to be cleared of the chemicals that caused the MCS FRAGG event; use highly diluted baby shampoo to wash your eyes. People who are hypersensitive to chemicals should NOT use Refresh PLUS or any kind of eye drop.  Even though the package and product are marketed as 'Preservative Free', it still contains far too many chemicals that would be detrimental to the hypersensitive.

Never assume a medication is OK.  You do not know until you try it. And that could be a very painful - possibly destructive - experience.

In this case:  "The more you know the better off you will be."

YOSAKIME
West Lafayette, IN, United States
I'm not just a _member_ of the MSC community. I am a survivor of the daily battles: physical, mental social and psychological. My world exists because others value their vanity more than the health of their neighbors. There is no nice way to put it. My world is the result of greed and vanity.